But what if the country’s tourist attraction is the last surviving Wonder of the world? How do you revamp such a site without outraging the historical and cultural significance for such a site?

That’s what the Egyptian government is trying to do.

For years and years, the Pyramids of Giza have been one of the biggest tourist draws of Giza, if not for Egypt themselves. But when your main tourist attraction is a cultural and historical site like the Pyramids, it raises a bit of a conundrum for the local government. How do you keep such an attraction fresh and caters to the tourists while not making changes that will ruin the historical side of the attraction? 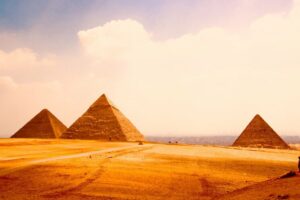 Fortunately, the Egyptian government might have found a way they can keep the Pyramids of Giza fresh for the tourists, without outraging the cultural and historical significance of the Pyramids themselves.

The Egyptian government has decided to add new tourist amenities to the Pyramid’s surroundings, to help it be more attractive to all walks of tourists. These amenities include a brand new restaurant, a cafe, and a lounge.

According to LonelyPlanet, the space will be named The 9 Pyramids Lounge, and will be located at the south end of The Pyramids, and designed as a relaxing area after a visitor’s visit to the Pyramids.

Those are only the start, however. According to LonelyPlanet, there are other amenities in the planning, including public toilets, site-wide signage, food trucks, photo booths, free Wi-Fi, and even cinemas!

Not only that, they will also be giving sensitivity training and courses for the animal handlers, who can be a tad too aggressive when offering rides to visitors.

According to Ashraf Halim, the CEO of Orascom Pyramids Entertainment, the investment group tasked by the Egyptian Government for the redevelopment of the Pyramids.

The redevelopment of the Pyramids are part of a larger plan to capitalize from the expected surge of tourists when the Grand Egyptian Museum Opens in 2021. The opening of the museum is a much awaited event, ever since it was first supposed to be opened in 2011.

Previously, the Egyptian government announced that the museum was supposed to be opening in 2020, but plans were scrapped due to the COVID-19 outbreak.