In the past 10 years, we have seen the rapid rise of the country of China, in both technological advances and in their stature in the world. Along with these advances, China has also made considerable efforts to ensure that they are counted as one of the best tourism destinations in the world.

Part of their efforts includes creating plenty of destinations, landmarks and attractions for their tourists. One of these attractions includes the copious amounts of glass bridges in the country. In China, glass bridges are a huge tourist attraction for thrill seekers. It was first built as an effort to encourage domestic tourism. 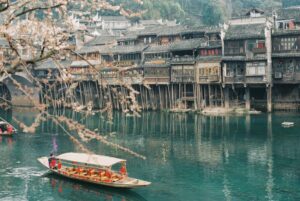 And it worked. Since the 2016 construction of The Zhangjiajie bridge which was the highest and the longest glass bridge in the world, large amounts of glass bridges were made, to capitalize on the trend. In fact, some people started making glass slides, walkways, viewing decks, and more.

According to a report from the BBC, there are more than 2300 glass bridges in China now. And it looks like the craze is not stopping anytime soon, as China just opened another record breaking glass bridge earlier this month.

The bridge spans 526 metres in length, and it’s set to be the world’s longest glass-bottomed bridge in the world. The bridge is held about 200 metres in the sky, above the Lianjiang River in southern China’s Huangchuan Three Gorges Scenic Area.

The bridge, which will be a surefire attraction to thrill seekers across the world is designed by the Architectural Design & Research Institute of Zhejiang University. According to Dezeen, the bridge can hold up to 500 visitors at once, and is equipped with platforms and walkway to ensure that there will be activities for thrill seekers in the region.