In this era, no matter what age group you are, you will definitely watch “anime” at least once in your life. Anime is a Japanese animation cartoon that is very famous throughout the whole world. Anime has its own various genres that are targeted to different age groups. It can also be both fictional and non-fictional, depending on the storyline and plot. If you really like anime, you might notice that some places in anime are actually based on real life. Therefore, just in case you are planning to visit those places, here is a list of anime places that actually exist in real life! 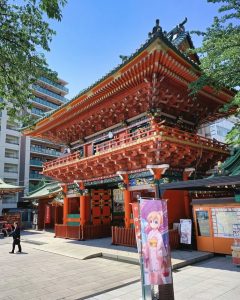 Kanda shrine can be found in Chiyoda, Tokyo, Japan. It is a Shinto shrine. The shrine is almost 1270 years old! However, it has been rebuilt several times due to natural causes. This shrine is also near Akihabara, so many geeks come here. This shrine is the shrine where Nozomi Tojo, the Love Live character, works at. The shrine also appeared in season 2 of Love Live where the new main cast, Aqours, visited the shrine.

This is really obvious but Ikebukuro is where the whole plot of Durarara happens! For those who do not know, Durarara is a light novel, manga, and anime series that features Dullahan as one of the main characters. The Dullahan, Celty, works in an organisation called Dollars. Slowly but surely, the Dollars will later become the center of problems in Ikebukuro as it involves various other dangerous people there. If you want to see the places where Celty rode her bike (or should I say horse?) and the fight scenes in the anime then head over to Ikebukuro!

If you are a fan of the underrated anime Bungou Stray Dogs, do not worry, we have something for you too! The iconic bar from the anime where Dazai, Oda and Ango hang out during their time in the port mafia, is actually real! Bar Lupin is a real bar located in Ginza, Tokyo. The bar has the same look and aesthetic as the bar in anime. If you are old enough to enter a bar and want to indulge in the “feels” of the anime, you can also visit the bar when you travel to Japan!

5. Salon de The Rond in Kimi no Na Wa

If you are a real fan of Kimi no Na Wa then you probably noticed the name of the cafe where Taki Tachibana, the main character, works at. And yes! Just like Bungou Stray Dogs, the cafe exists! The cafe name is “Salon de The Rond”. It is located in Minato City, Tokyo, Japan. The cafe looks the same as the anime. If you want to have a taste of the cafe where Taki works at, then do come to Tokyo, Japan! 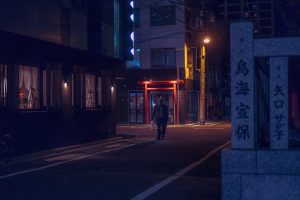 6. Asakusa in Kimetsu No Yaiba

I am sure that most people know the hit anime Kimetsu no Yaiba. Even though the anime is set in a fictional Japan, a certain district in Japan actually is in the anime. Presenting Asakusa, the city that appeared in Kimetsu no Yaiba. Asakusa appeared when Kanjiro first met Muzan. That is Asakusa. The traditional-like district in Japan that is still busy in nightlife, just like the anime. Do visit it if you are in Japan, who knows you might bump into Muzan too?

7. Asahi Inari Shrine in Weathering With You

If you had watched Kimi no Na Wa, you certainly watched the sequel right? Weathering With You is a movie that takes place after the event of Kimi no Na Wa but with different characters! As we can see in the movie, one of the main characters, Hina, prayed to a shrine for sunshine. That shrine actually exists and it is called Asahi Inari Shrine. If you want to pray for sunshine throughout your whole life, do come here and pray! But beware though, do not flood your country instead hehe.