In most people’s lifestyle of the rat race and the busy bee, trying to make time to keep healthy might be a bit of a hassle. Which is why Yoga, the ancient Indian spiritual practice is and has been booming for the past 10 years. It’s simple, easy, and can be done in the comforts of your home. All you need is a yoga mat, and you’re good to go!

This accessibility is the chief reason why Yoga as an industry has been and will continue to boom for the foreseeable future. According to the 2016 Annual Yoga Journal, 36.7 million people practiced Yoga in 2016, which is a huge jump from 20.4 million in 2012. If you want to talk numbers, the Yoga market was worth $16 billion in 2016, and $80 billion globally.

That’s how big the Yoga market is now. And nowadays, if you’re interested in learning more about Yoga, a simple Google search can show you all the Yoga classes around you. But, if you want to learn Yoga from a deeper perspective, then nothing can beat going to India, where the ancient art of Yoga originated.

Which is why in this article, we’re going to list the 6 best places for you to visit in India to learn more about Yoga.

The first entry in our list is Mysuru, or perhaps more known as Mysore, a city in the South Western state of India, Karnataka. Mysuru has always been regarded as playing an integral role in the spread of Yoga as an art form and as an ancient practice of healthcare.

In Mysuru, you can find T. Krishnamacharya’s renowned yoga shala in Mysuru Palace, and Mysuru is also the birthplace of the Ashtanga and Iyengar style of Yoga. Nowadays, most yoga classes in Mysuru are located in and around Gokulam, a residential neighborhood in the city.

Yoga classes in Mysuru not only offer training in Yoga and it’s Asana’s, the classes also include lessons on Ayurvedic-style deep tissue massage known as Abhyanga, sound meditation, chakra healing, astrology, reiki, and many more.

Mysuru is indeed the best place for anyone who wants a deeper understanding in Yoga, and the arts that surround this mystical discipline. 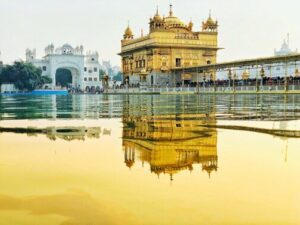 The next destination we’re going to suggest for you is still located in the Southern part of India, which is the city of Allepey, in the state of Kerala. Just like Mysuru, Allepey is a city that prides the history of Yoga as one of their main tourism draws.

The history of Yoga in Allepey is steeped in the city’s rich history as one of the cultural hubs for India. Allepey is famous for their performing arts’ history, their reputation as one of the premier spice producers of the region, and it’s rich and varied geographical terrains, Allepey established themselves as the one of the most important regions for Ayurvedic therapy, and Yoga as well.

In Allepey, the act of Yoga itself takes a backseat as here, you will be focusing more on the Ayurvedic parts of the Yoga discipline. Allepey is home to famous Ayurvedic resorts such as the Punnamada Ayurvedic Resort or the Kumarakom Lake resort. These resorts offer you the complete Ayurvedic treatment which includes the Panchakarma, Pizhichil, Abhyanga oil massages, and Ushma Sweda herbal baths.

For a complete Ayurvedic experience, you can’t go wrong with Allepey.

From Allepey, we move on to another city in the state of Kerala, Kottayam. Just like Allepey, Kottayam is a historical site that is very important for the growth of Yoga. Before the influx of Western medicine in the 19th century, the practices of Ayurveda was the primary form of healthcare in the city of Kottayam. And from there, the ancient practice has been passed down to their descendents so that the art of Ayurveda will live on.

The Ayurveda and Yoga legacy in this city can be seen in places like Athreya Ayurvedic Centre. This centre is built in the middle of the paddy fields, and the only place in the country with Kutee huts. Here, you can learn the art of Kutee Praveshika Rasayana, a treatment that focuses on anti-aging and improving your immunity.

For people who are somewhat familiar with India’s tourism industry, the state of Goa is nothing new for them. Goa is the stated fame for its  beautiful sandy beaches, making it a veritable heaven for beach-lovers .In fact, the state of Goa brings in the highest GDP per capita in India.

But Goa is not only famous for its beaches, Goa is also home to some of the best Yoga and Ayurvedic classes in India. In Goa, you can learn about the history and the heritage of Ayurvedic treatments and Yoga from places such as Mercure Goa Devaaya Retreat, or you can even go for innovative Yoga classes such as the famous Oil Yoga classes.